If you look at the faces of Belize they represent a diverse cultural landscape. There are Creoles, Mesitzos, Mayas, Garifunas, Mennonites and many newly immigrant groups such as Chinese, Lebanese and East Indians. Despite their different cultural roots, the one thing that everyone has in common is the Creole language. It is one of the cornerstones of being Belizean. 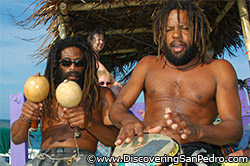 But isn’t the official language of Belize English? Yes it is. Our educational, legal and political systems were adopted from Britain. Every child who goes to school learns to read and write with English textbooks. However, it’s when the bell rings and children storm out to the playground that they learn a different language. Playing marbles, catch, football or hide-and-seek, kids communicate in Creole. This is the language that unites so many different cultures in Belize. No matter what your background, when you grow up in Belize you learn to speak Creole.

For native English speakers listening to Belizean Creole you might be able to pick out a few familiar words and infer some meaning from the context, but full comprehension always seems to slip away. So for those of you who want to wap a li Kriol (speak a little Creole) when you’re in Belize, here are some common phrases you can try: